Jenny MacDougal had brought someone new to live in the tiny bungalow behind the lighthouse. Billy the budgie arrived one morning in spring and took up residence in a corner of the kitchen. He came complete with his own cage on a tall stand, his own perch, bell and mirror. For many years Billy had belonged to Jenny MacDougal’s elderly aunt but she became too ill to care for him. So the MacDougals, who, as you know, are very kind people, rescued Billy.

When he first arrived he was a pitiful sight. Auntie Mary had neglected him for months and he was very thin and scruffy. His beautiful blue and white feathers looked moth-eaten and he scarcely had enough energy to hop along his perch.

Stanley peered up at Billy resting miserably in a corner of his cage and felt very sorry for him. He wondered if budgies ate shortbread. Stanley believed that just one bite of Jenny MacDougal’s shortbread would cheer up anyone straight away!

Billy spent hours hopping along his perch, sharpening his beak on his cuttlefish and ringing his little bell. He also spent a lot of time in front of his mirror, talking to himself, preening his wings, admiring his pretty blue feathers.

From her cosy basket, Clem watched him in amazement. ‘Why does Billy spend so much time looking at himself?’ she muttered to Stanley.

‘I suppose he can’t do a lot and he’s just stuck in that cage all day, so he has to amuse himself somehow,’ whispered the hamster.

Clem stretched lazily then eased herself out of the basket. She walked across the kitchen, jumped up effortlessly onto the kitchen table and crept across on her soft paws until she was nearer to Billy’s cage.

The budgie was burbling affectionately to his reflection in the mirror. He had not yet noticed Clem.

The kitten’s high-pitched meow caught Billy by surprise. He slipped off his perch, landed in an ungainly heap on the floor of his cage, close to the bars and closer to Clem.

‘Don’t you dare threaten me. I’ll make sure the MacDougals come running if you do. Keep away from my cage, you disgusting creature. I know all about cats. Clear off!’

Clem was so surprised. What an angry and mean answer!

She tried to reassure Billy but that only made him more angry. The kitten retreated to her box, feeling puzzled. She decided it would be best to leave the bad-tempered bird alone.

Later that morning, she sat on Dougal MacDougal’s lap purring contentedly as he sipped his coffee. Billy was glaring at her from his perch. The more Clem purred the angrier he became.

When Dougal left the kitchen, Billy sidled up to the bars of his cage and peered down at Clem in her basket.

‘You are the ugliest kitten I have ever seen. How can Mr MacDougal bear to have you near him? You are a piece of ginger rubbish – a lazy good for nothing waste of space – a disgusting ball of orange fur – you should have been drowned at birth instead of wasting the time of good people like Mr and Mrs MacDougal.’

So Clem turned her back on the budgie and tried to settle down to a nap. But all day long the budgie taunted Clem from his cage.

That afternoon the kitten was too miserable to eat her supper.

In the following days Billy tormented the little kitten whenever Mr and Mrs MacDougal were absent from the kitchen. Clem withdrew into herself. She lost her appetite. She would not even talk to Stanley. 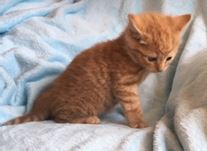 Dougal MacDougal was worried that Clem was sick. Stanley wished he could tell the kind man what was really happening. But what could a hamster do to help?

He lay snuggled up with Clem that night. The MacDougals had gone to bed and Billy was asleep at last, his head tucked under his wing. Stanley could feel how thin Clem was under her soft fur and he lay awake racking his small hamster brain for a way to help his friend.

The Great Light shone momentarily in the darkness beyond the kitchen window and at that moment Stanley had a Brilliant Idea.

He started nibbling Clem’s paw to wake her up. She opened her eyes miserably.

‘Come on Clem. We have to go out right now!’

‘Can’t be bothered,’ she mumbled.

At that second, Billy woke up and began to hiss at Clem and Stanley calling them rude names. He couldn’t think of many for Stanley but he certainly found some horrible insults to hurl at Clem. The kitten leapt growling to her feet, scrambled out of her box and slipped through the cat flap which Dougal MacDougal had wisely fitted in the back door last week.

Stanley followed closely behind and managed to squeeze through the gap at the side of the flap as Clem held it wide open for him with her furry body.

‘Now what?’ she asked her friend.

‘I hope you know what you’re doing. It’s chilly out here!’

Stanley led the way across the yard, under the gate, up to the door of the lighthouse. They slipped in through the narrow gap. Mr MacDougal should have closed it up but he knew the two friends loved to explore in there and hadn’t the heart to stop them.

Clem scampered up the steep stairs. Every so often she had to help Stanley by heaving his fat little body onto the next step. ‘You’ve been eating too much shortbread, Stanley,’ she puffed.

At last, they reached the top and found their favourite corner in the room of the Great Light. It whirred and clicked, beaming out into the night. Dougal, who was rather forgetful, had left an old coat there and the two friends curled up together, grateful for its warmth. Clem sighed – she felt safe for the first time in days.

In the bright light she began to see that all Billy’s words were lies. The lies were a black mist which had invaded her thoughts but now gradually evaporated and then disappeared completely.

Clem looked at Stanley. ‘How clever of you to bring me here.’

Stanley grinned a hamstery grin. ‘I remembered that the Great Light always shows the truth. I knew that would help you.’

The next morning, Dougal found them still curled up asleep in the corner. He gazed at them thoughtfully. An idea was forming in his head. So he went to find his wife.

‘I know what Billy needs,’ he said. ‘He needs company. You remember Percy Smith in Swanage?

‘Yes, Jenny, but he’s not potty! That was a cruel nickname some people used at his school. Anyway, he keeps budgerigars in an aviary in his garden. I’m sure he would accept an extra one and then Billy wouldn’t be so lonely.’

Later that day, Clem and Stanley watched Dougal take Billy’s cage off its stand ready to transport it in his car to Percy’s house. Down on the kitchen floor, the budgie stared defiantly at Clem from behind the bars. She walked confidently right up to his cage and looked straight at Billy. ‘All the things you said to me were lies, Billy, but I forgive you for that. If only you could meet the Great Light you’d realise how horrible your lies are. But I hope you will be much happier in your new home.’

Billy could not squawk one word. At that moment, Dougal MacDougal returned and carried the cage outside. Clem and Stanley heard the engine start and then the wheels crunched on the gravel as the car turned down the drive.

Stanley scampered up to Clem. ‘I have always thought you are an amazing colour,’ he said. ‘Bit like a fuzzy satsuma on four short legs.’

‘Whaaat!’ growled Clem. ‘Just you wait, you pesky fat shortbread-guzzler!’ And they were off, chasing each other around the kitchen, under the table, behind Dougal’s big boots, over the chairs, finally collapsing in a happy heap in their box.

That night, after a beautiful sunset, the Great Light shone out magnificently across the sea as it always did. Stanley wondered if Billy could see it from his new home. He hoped so. It was the best light in the world, after all.

In Chapter 5 – All Change, something strange is happening to Arnold the caterpillar …

One thought on “Lighthouse Capers (Chapter 4) – A Friend In Need”